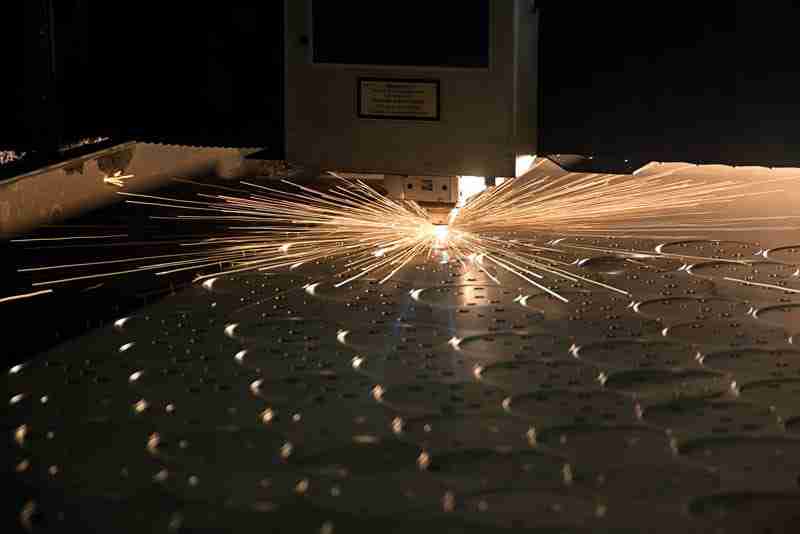 “LASER” is the acronym for Light Amplification by Stimulated Emission of Radiation. A laser is a device that generates an intense beam of coherent monochromatic radiation in the infrared, visible, or ultraviolet region of the electromagnetic spectrum, by stimulated emission of photons from an excited source. Laser technology practically affects every aspect of daily life, including manufacturing and metal fabrication as well.

Cutting metals and other materials, from plastic film to refractory ceramics, is a well-established application of lasers and it is growing, as its quality advantages become widely known. In industrial practice, a continuous infrared carbon dioxide laser beam is the workhorse of the industry. This cuts an almost invisibly small slot in metal at a distance of one millimetre or two from the end of its nozzle. In operation, the first task is to start the cut, either by starting at the edge of the metal or by “KEYHOLING”, i.e. cutting an initial hole straight down. The keyhole is often ragged, so operators usually perform it on a part of the work piece that will be scrapped. Once started, laser can cut very heavy gauge and very tough steel, leaving only a tiny kerf of wasted material, often less than 0,5 mm. The finish of the cut edge is the key to the economics of laser cutting. Since no further operation is frequently required to smooth the edge, it avoids considerable finishing costs.

There is a variety of laser machines available, using different technologies to produce the laser beam:

The use of all lasers for cutting relies in general on an “ASSIST GAS”, typically Oxygen, which reacts with the metal melted by the laser and leaves a clean cut. Similarly, for materials that cannot or should not be burnt, a high-pressure jet of Nitrogen can be employed. Oxidisation of certain materials can be an undesirable problem caused by the application of heat in the presence of Oxygen, since it produces discolouration and causes a carbon layer to form on the cut edge. This can affect the appearance of the finished product, or cause lack of adhesion for any coating or paint finish on the oxidised surface. Due to its inert properties, NITROGEN gas prevents oxidisation by allowing the laser to operate in an Oxygen free environment. Therefore, a coaxial nozzle assembly directly supplies the “assist gas” to the cutting point. This ensures the precise placing of gas pressure above the molten metal pool formed by the laser, clearing the cut and blowing away the molten material. This produces a clean edge without any residual material sticking to the underside of the material (sometimes referred to as “dross”).

Furthermore, Nitrogen is also the ideal medium to use for beam “GUIDE-WAY PURGING” as it is dry, clean, and oil-free, with a very low contaminating content. In fact, many laser-generating machines produce the beam in one section and have to direct it to the point of use. The laser beam is generally contained within hollow, telescopic tubes and flexible bellows, and various lenses and mirrors focus and reflect it until the target area. To prevent the beam from distorting and to maintain its power and intensity, the beam path needs to be clear of dirt particulate and any other contaminants that could cause it to diverge or lose power. The lenses and water-cooled mirrors also need to be free of dirt, condensing hydrocarbons and water vapour that could otherwise cause burning and marking of these expensive components.

Obtaining a suitable supply of Nitrogen gas for metal laser cutting can be problematic and expensive. Traditional supply methods are high-pressure cylinders, bundles and bulk storage vessels, involving rental, refill and delivery, environmental levy and order processing charges, in addition to several other problematics such as supply monitoring, payments management, storage handling and maintenance, etc. If, moreover, the price of gas and supplier’s rates continually increase while the environmental impact of truck based deliveries gains significance, the cost of traditional supply becomes extremely high and difficult to budget.
On the base of specific Nitrogen utilization techniques issued by manufacturers of laser cutting machines, Gasgen has therefore designed and conceived NITROGAS® LC series, a range of complete Nitrogen PSA generators for laser cutting application.

On-site generation is a simple and smart solution to save money, to improve efficiency and to take full control of your supplying process, generating the exact quantity of Nitrogen at the needed purity. By means of Pressure Swing Adsorption (PSA) technology, NITROGAS® LC Nitrogen generators for laser cutting produce Nitrogen from industrial air class 1.4.1, ISO 8573.1-2010 standard. Dry and clean air from a standard industrial compressor and an air treatment system is essentially “sieved” to remove Oxygen and other trace gases, while Nitrogen is allowed to pass through to the application. By using specially selected molecular sieves (CMS), NITROGAS® LC Nitrogen generators for laser cutting make possible to obtain extremely pure Nitrogen (up to 99.999%) with a very moderate air consumption.

Not-cryogenic air separation is a well-known process, but the design and control features applied on NITROGAS® LC Nitrogen generators help to maximise gas output and reduce air consumption, achieving the highest levels of efficiency. As a result, choosing an on-site Nitrogen generator rather than relying on an external traditional supply can lead up to 90% costs reduction: the investment’s payback period is typically between 6 and 24 months.

NITROGAS® LC Nitrogen generators eliminate the need for transportation and storage, so they help to minimise the environmental impact of using Nitrogen for industrial processes. Moreover, the systems can help achieve safer working environments as they remove the safety risks concerned with external supplies such as storage, handling and replacing heavy, high-pressure cylinders.

For any additional information or for asking a quote, please contact directly our sales team.

We use cookies on our website to give you the most relevant experience by remembering your preferences and repeat visits. By clicking “Accept”, you consent to the use of ALL the cookies.
Cookie settingsACCEPT
Manage consent

This website uses cookies to improve your experience while you navigate through the website. Out of these, the cookies that are categorized as necessary are stored on your browser as they are essential for the working of basic functionalities of the website. We also use third-party cookies that help us analyze and understand how you use this website. These cookies will be stored in your browser only with your consent. You also have the option to opt-out of these cookies. But opting out of some of these cookies may affect your browsing experience.
Necessary Always Enabled

Any cookies that may not be particularly necessary for the website to function and is used specifically to collect user personal data via analytics, ads, other embedded contents are termed as non-necessary cookies. It is mandatory to procure user consent prior to running these cookies on your website.